If you’ve read through all the different pre-surgical techniques and you feel as if you are not comfortable with any of them, don’t worry, because you don’t necessarily need to use any of those. Remember, you are your child’s best advocate and only you can make the right decision as to what will work best for your child…and YOU.

The pros of not using any pre-surgical technique is that you can enjoy your baby just like any other newborn without the stresses of having to tape or tighten a screw everyday.

The cons are the possibility of extra surgeries down the road. 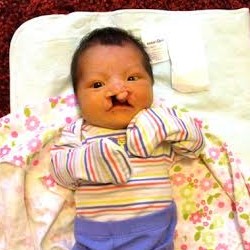 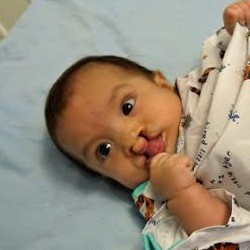 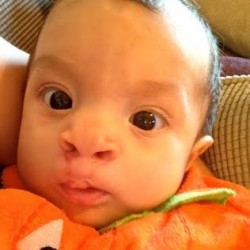 My baby girl was born at 1:31 am after an hour in the hospital and maybe two hours after I knew I was in labor. The doctor delivered Francine Elosia and before she was all the way out, he said “There’s something on her lip.” I never in my wildest dreams would have thought I would see my newborn girl for the first time and wonder what in the world I was looking at. She had a bilateral cleft lip and palate. I’d never seen or heard of such a thing.

I was completely overwhelmed with everything this could mean. What do you do with a baby like this? Fantasy after fantasy that I had all while I was pregnant was shattered in the coming weeks as I learned more about clefts and my baby. The head of the craniofacial clinic at Children’s Hospital of Orange County, Dr. Zadeh, came to see Francine the day she was born. She checked for signs of a syndrome and found none. Francine had an isolated cleft lip and palate. Her heart was also checked with the ECHO and was cleared at a follow-up visit with a cardiologist. She never visited the NICU and was otherwise health and strong.We took Francine a few days old to the CHOC craniofacial clinic, where we met with a wonderful nurse who helped us find the right bottle for Francine, which ended up being the haberman. She talked to us about the options for surgeons and also pre-surgical devices. We quickly met with Dr. Leonard Prutsok just to get an assessment on the severity of her cleft and if a device would be necessary in his opinion.

Dr. Prustok seemed very untroubled by the sight of Francine, like it was no big deal. I sort of liked that, because I expected a reaction out of anyone that saw her. He was very calm and matter-of-fact. Clearly he has done a ton of repairs and has probably seen it all. He told us he doesn’t use the NAM or any pre-surgical devices. He hasn’t personally found that it makes a worthwhile difference in the end.

I felt a weight lifted off my shoulders. I could barely look at a picture of a baby with the NAM in place at that point, let alone think about putting it on my daughter. I had only days earlier learned of her cleft when she was born. I was trying to wrap my head around having a baby with this birth defect, what was ahead in her future, how I would take care of her in the coming days, not to mention weeks and months. I literally took things hour by hour for the first several weeks. If I looked at the big picture, I thought I might lose my mind.

That was my main reason for not wanting the NAM. I think if I had known of her cleft during pregnancy, I may have felt differently. I would have already processed the whole situation and researched what needed to happen when she was born. Another plastic surgeon, Dr. Jaffurs, also at CHOC, does use the NAM with his patients. We never met with him. My husband and I both felt strongly at that point about not using the device and found a doctor who doesn’t use it. We didn’t feel the need to look further.

Francine’s lip repair was done at 4 months old. She was born pretty small, and our main focus was weight gain. So by the time she hit ten pounds and got the surgery scheduled, it worked out to 4 months. Her protruded premaxilla has pushed back, as Dr. Prutsok told us the lip repair would do. I’m certain it’s not as even at this point as a NAM baby, but I’m confident that one day it will be.

I regretted not using the NAM for a while after her lip repair, but I’ve since come to terms with our decision. I know that when Francine is 20, no one will know whether she used it or not. There are many paths that lead to the same place. I know she’ll be beautiful. – Kelly Jimenez 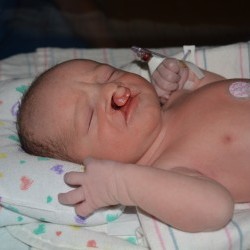 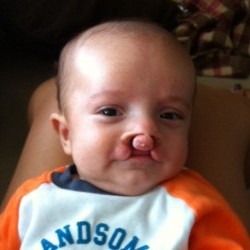 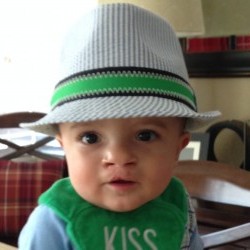 “Perfectly formed Ryder Jeremiah Stocking was born on Wednesday, July 10, 2013 at Mission Hospital in Mission Viejo, CA.  We knew from his 20-week ultrasound that he would be born with a bilateral cleft lip and palate.  The days, hours and minutes following that 20-week ultrasound were filled with tears, doctors appointments, waiting, tests, more tears and more waiting.  Shortly after Ryder’s cleft was identified I had an amnio to test for chromosomal defects and thankfully those all came back negative.  Prior to Ryder’s birth we met with one of the plastics surgeons on the Children’s Hospital of Orange County (CHOC) team named Dr. Prutsok.  He reviewed the list of procedures Ryder would need and also gave us some insight as far as what to expect pre and post surgeries.  Dr. Prutsok made slight mention of the NAM but since he did not use the NAM he did not go into much detail.  It was all very overwhelming and even though I had known Ryder would be born with a cleft it was still a lot to swallow when he arrived.  It’s one thing to try and prepare for something, it’s another thing to actually be going through it.  After Ryder was born he spent 1 week in the NICU to help with bottle feeding and weight gain – we anticipated a short stay in the NICU as the CHOC team had informed us this would most likely take place.  After Ryder’s NICU release we had some unanticipated bottle issues at home – the pigeon bottle he had been using since birth was causing a blister on what little palate he had, making it bleed. We quickly switched to the haberman bottle but not without its challenges – Ryder did not take to the new nipple/bottle easily and after a couple of frustrating days he finally got the swing of it.  I remember calling the CHOC team in tears and Sharon Vargas (the cranio-facial nurse) was so encouraging and even connected me with a fellow cleft mommy – Kelly Jimenez.  To this very day, Kelly is such a source of love and encouragement for me and my family.  Finally, I was able to talk to someone who had walked in my shoes, shed the same tears, faced the same fears.

Approximately 6 weeks after Ryder’s birth we were able to meet with a second plastic surgeon for a second opinion (due to insurance reasons we weren’t able to get approval for a meeting with a second plastic surgeon until after Ryder was born – insurance hurdles are some of the biggest challenges we faced throughout our experience). The second plastic surgeon we met with was Dr. Jaffurs and he was a proponent of the NAM and encouraged us to pursue meeting with a prosthodondist to ask detailed questions.  We met with the prosthodontist, Dr. George, and because Ryder was already 6 weeks old he informed us that Ryder would need to wear the NAM for 6-8 months before he could have his lip surgery.  Dr. Prutsok on the other hand said we could schedule Ryder’s lip surgery as early as 3 months since he did not encourage the NAM.  I remember the sleepless nights, heavy heart, endless researching wondering what should we do? Which plastic surgeon should we select for Ryder’s surgery? How much would insurance cover if we pursued the NAM? Pros vs. cons of NAM vs. no NAM?  Would Ryder be upset if we did/did not explore the NAM route? In the end, we decided to not utilize the NAM and scheduled Ryder’s lip surgery for early October, just shy of Ryder turning 3 months.  It was the best decision for us at the time and we are very happy with the outcome of Ryder’s initial surgery.  The NAM isn’t for everyone but I have seen success stories on both sides of the spectrum.  I’ve seen beautiful noses and lips with NAM and no NAM.  We all walk the same journey, just different pathways but all leading to happily ever after.” – Serina Stocking 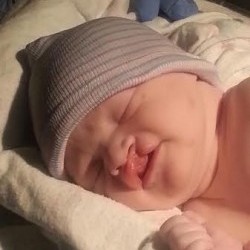 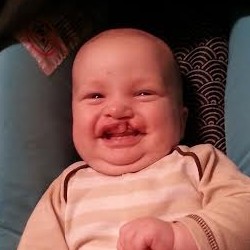 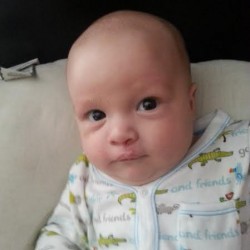 “My beautifully perfect son Dallas Scot Carter was born at 4:21 AM on July 26th at Miami Valley Hospital in Dayton, OH. We knew from the 20 week ultra sound that he was going to have a unilateral (left side) cleft lip, they were fairly certain the palate was going to be involved too. When we got the diagnosis, I immediately was so filled with fear. I had never even considered that my child could be born with a…birth defect. So, being a worrier, naturally the tears started flowing and once they started they didn’t stop. I just kept thinking to myself I had to pull it together to walk up stairs to my regularly scheduled OB appointment. My OB is more than just a doctor to me, he delivered me, my daughter, and now he was going to deliver my son. I told him the news and he prayed with me, and told me that this was the most common defect and 1 in every 500 babies is born with a cleft, that him having this was like having a cavity and his surgery would just be like going into get a filling. I left that appointment feeling a little more at peace about it. I opted to not undergo any other tests, but the next 20 weeks were filled with appointments and ultra sounds.

We were able to meet with the surgeon about a month and half before Dallas was born. He told us that no matter how looked he was going to be able to fix it. He also told us that if his cleft was extra wide we would have to use some “tools” to draw it closer together so it would be easier to fix. He was extremely confident in his skills, which made us confident that this was going to be just fine. When Dallas arrived, and I saw that perfect baby for the first time, all that worry just went away. It was like a 1,000 pound weight got lifted off my shoulders. He didn’t end up having any palate involvement just a notch on the left side of his gums. The plastic surgeon came in to take a look at him the next day, and said that it was narrow enough that we did not need to worry about using the NAM, taping, or lip adhesion. All of those were good things to hear because I don’t think I would personally be comfortable with doing any of those things. We scheduled his surgery in October 23rd 3 days shy of him turning 3 months old.
I look at him today and am extremely happy with the way his initial lip revision turned out. He was beautiful the day he was born, and he is even more beautiful today. For us using nothing was the best option at the time. I do not regret that one bit. I have, however seen beautiful outcomes from both sides. The ultimate goal in all of this is making sure our babies are happy and healthy no matter which route we take to get there.”-Amber Swihart
Back to Top
Enter your Infotext or Widgets here...