The Latham works rather quickly and is worn for about 6-8 weeks. The Latham does require an extra surgery to “install” the device, as it’s held in place with surgical pins, but this surgery only takes 20-30 minutes. You, as the parent, will be required to turn the screw every day to keep everything moving in the direction needed. You will most likely also be required to attend weekly visits with your child’s orthodontist so that they can tighten the chain.

The pros of the Latham is that you see movement very quickly and, of course the end results. Another thing moms like is that it’s held in place, surgically, so there is minimal to no cause for the stress of a possible choking hazard.

The cons of the Latham is that it does require an additional surgery and there is a small (1 in 100) chance of the device “slipping” out of place which could result in another surgery to replace it. 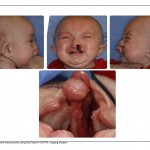 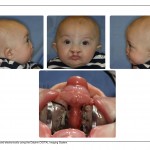 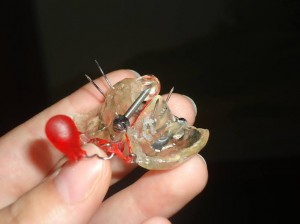 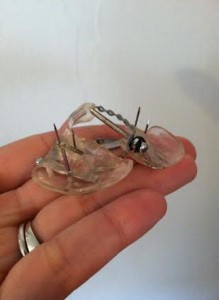 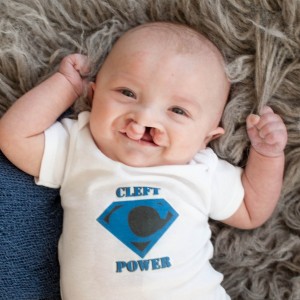 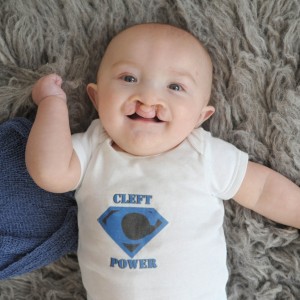 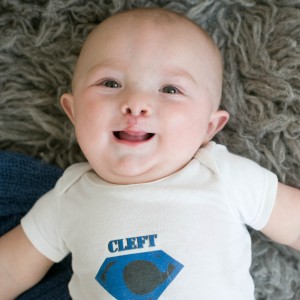 Hear about the Latham from Nolan’s Mom

“When I first found out about my son’s cleft in utero, I began feverishly searching the internet for information and answers. Several times, I came upon various pre-surgical devices such as the NAM and the Latham. Quite honestly, they both went right over my head. We were able to meet with our cleft team (Boston Children’s Hospital) before my son, Nolan, was born. They explained the different surgeries he would have the first year and talked to me about the Latham, which is their chosen pre-surgical device. Once again, this visit was totally lost on my husband and me mostly because it was such a large amount of information that was so foreign to me.

Once my son was born, we met with our team and the orthodontist about the Latham. They measured his mouth, took pictures, and explained that the recovery from this procedure would be a tough one. He stressed this to me several times.  I chose to ignore that information and hope for the best. The surgery to install the device was relatively quick, lasting only an hour or so. When they brought my baby out, I could already tell a drastic change in his smile. It was unreal. We stayed one night in the hospital to monitor his eating and were sent home the next day. At home,  he showed VERY little interest in eating. I expected it to get better within the next day. Unfortunately, it was a solid 5 days before I was able to see my son’s beautiful smile and not have to force feed him. It was not a fun road. I e-mailed the doctor and asked the other cleft moms and found out that 5 days seemed to be the magical number.

In the moment, we were very unhappy and I swore that I would never have a positive thing to say about the Latham. After those first daunting days passed, it was as if he hadn’t even had surgery. We had to turn the screw in his mouth (not as bad as I thought it would be) and were asked to be aware of anything stuck in his device but Nolan was totally fine with it.

The change in his cleft was so apparent and perfect. I quickly became a supporter. One thing I loved about the Latham is that it was 100% on the inside of his mouth so after the initial screw turn,  I didn’t have to do anything. I didn’t have to tape, nor did I have to worry about any discomfort caused by it. Don’t let the scary looking design of the Latham or the one rough week scare you away. I feel that this is an incredibly efficient and genius device to have helped prepare my son for his lip and nose repair. It was also nice to get one of the tougher surgeries out of the way to start. It made  the lip/nose repair seem like a walk in the park. If I had to do it again, I would definitely choose the same team as well as their use of the Latham. ” – Megan Bailey 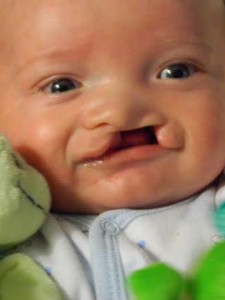 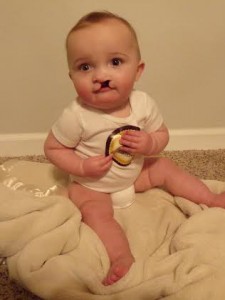 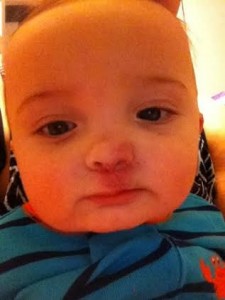 Hear about the Latham from Sawyer’s Mom

“When Sawyer was first born we were told the cleft team we chose treats a cleft gum line with a “Latham” device.  I had NO idea what that was and tried to find a few things on the internet which was a bad idea.  I want to share our experience with this device, and BUST few rumors.  The latham is an extra surgery which is no fun for any parent, but it only take 20 to 30 minutes to “install”.  It is held in place with surgical pins.  The first day the child is a little cranky, but over the counter pain meds like Tylenol or Ibuprofen treat the pain with ease.  No “big heavy drugs” are needed for most kids.  It was amazing to me how fast my little boy got used to this device and I saw movement the very first day- it was incredible.  To me, that is the highest point of the latham- you see movement so quickly.  Every day you will turn the screw 1/4, 1/2, 1, or 2 full turns for about 6-8 weeks (or until the cleft closes).  I did it when Sawyer slept and then he got used to it and didn’t mind it being turned when he was awake- I did have to keep an eye on it though because sometimes it liked to turn back.  The screw is to bring the cleft jaw forward.  Then, the orthodontist will start tightening the chain at weekly visits which closes the cleft within 3mm.  A BIG “con” I read online about the latham was it causes severe under bites.  NOPE!  Having a cleft is actually the cause.  The premaxilla grows slower than the bottom jaw in a cleft child causing an under bite- not any device.  The only cons we had with the latham, and I need to say this is probably less than 1% of all Latham patients, but Sawyers slipped off of his gum line and had to be put in again with screws.  Oddly enough, he never needed any meds after the second surgery- he did wonderful.  If your Cleft Team wants to use the latham- go for it!  Be happy that your child gets to be one of many to use this amazing life changing device.  Sawyer’s cleft was 17mm wide, and on surgery day closed down to 3mm.  It’s a little bit of a pain, gets super icky, you’ll pull stuff off of it that you never knew your child could produce, but it yields AMAZING results for an easy lip repair.  I highly recommend it.  With all of our complications with it, which again- are uncommon, I would do it again without hesitation. ” – Jessica Norman 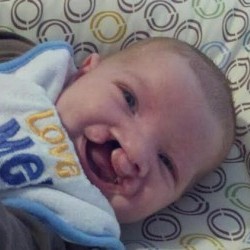 Prior to Latham insertion 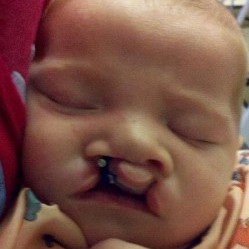 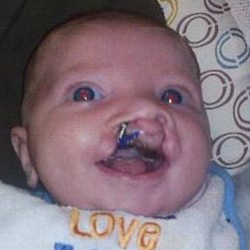 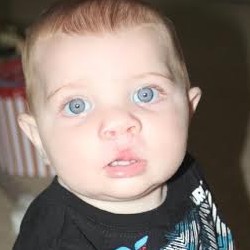 Hear about the Latham from Kaden’s Mom

At 5 weeks old, the dentist took impressions of the mouth and sent them off the the device to be made. At 8 weeks, the Latham was installed during a 45 minute surgery. A screw was tightened daily and a rubber band tightened weekly. It was taken out at 12 weeks old during the lip repair.
Pros: The process was very quick. You could see movement within the first couple days.
Cons: Requires surgery/anesthesia.
Additional appointments. We went weekly for the rubber band to be tightened and the Latham to be cleaned.
In our case, Kaden’s nose became symmetrical and his gumline is now touching.” – Katie Hurley 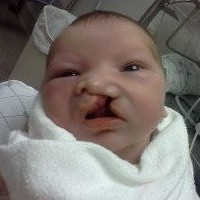 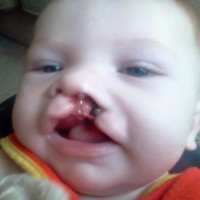 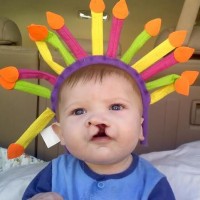 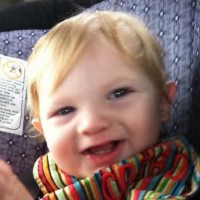 Hear about the Latham from Creed’s Mom

“Creed’s cleft was a birthday surprise for us. After his birth scary words were thrown our way like surgeries, Latham insertion, and the whole unknown of what was ahead of us. The Latham sounded a lot scarier than reality. We did the mold for his latham 2 weeks before the scheduled day of insertion. At the time he was a little over 5 months. The morning of surgery was smooth. They took him from us, had him back in the OR for 20 minutes, and then called for us to have his first feeding. We were released after 2 hours of nurses watching him. For 2 days we alternated Tylenol and Motrin every 4-6 hours. After the 3rd day we started turning the screw a quarter turn twice a day and gradually worked our way up to a full turn twice a day. We gave him Tylenol and Motrin in alternations 30 minutes before turning the screw for the first 2 weeks. Eventually you can’t see the screw anymore and have to just feel for it. Honestly the worst part of the latham was keeping it clean. Creeds latham also had a nose stint attached to it to help elevate and form his nose during the time the latham was in. The latham was in for 5 and a half weeks and the last 2 weeks before lip repair we didn’t have to turn the screw anymore because it had already closed. The aspect of having an extra surgery is scary and turning a screw that moves their jaw sounds terrifying. In reality it’s no where near as bad as it sounds. The results are well worth the extra surgery. I would do it all again if need be.” – Patience Bradshaw