Little N was born a day before J-babe’s 9th birthday, and a few weeks after Big B’s 6th birthday. Needless to say, it had been a while since I’d had a baby. Naturally that would make any mother nervous, or feel like she was starting all over again. For me this was true, but for an even bigger reason: my first two kids both have health issues that greatly affect (or affected) their life. I was two for two. Not very good odds. But all the ultrasounds showed everything looked great, except for one BIG surprise at 36 weeks: our “girl” actually wasn’t a girl, it was a boy. So after having a girly baby shower, I found out we were having a boy, and there was no mistaking it by the ultrasound pictures. But HE looked great, and was measuring big, so we tried to change our mindset to “boy” in the last month of the pregnancy. 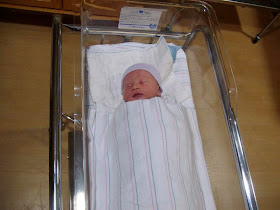 When he was born, he looked small to me, but when they put him on the scale, he was 8 lb 15 oz. He looked so perfect. But I still couldn’t shake my fears, knowing that there was a chance something could be wrong, considering our history. And when he didn’t come right back after the nurses took him to be suctioned, I just knew something wasn’t right. Why were they keeping our baby for so long? I wanted to try nursing him, and hold him. So when we saw two nurses come into the room with very somber faces, I braced myself for the worst. They simply said that while they were suctioning him, they found a bilateral cleft palate in his mouth. And they continued explaining the condition, but I’m not sure how much I really heard, because all I heard in the beginning was “cleft palate.” Wait, wasn’t that when babies have the lips that need to be repaired? Those babies on those commercials where they are asking people to donate for their surgeries? I knew nothing about this birth defect. Our baby had a birth defect. How did this happen? What did I do wrong in my pregnancy? But above all, why were we given another child with some type of need? How was I going to do this? So many thoughts and fears ran through my mind.

The nurses reassured us by saying the cleft was only in his mouth, but it was pretty wide compared to others they’d seen, and amazingly, a baby born just the day before had one, too. So it’s very common, the most common birth defect, in fact, but mostly for those that had the cleft lip/palate together. But not common for our family–it’s never happened in our family, on both sides! How did it happen to us? They said he would need surgery to repair it. Surgery. On a baby. Our baby. I tried to push that thought aside for now. They told me he would not be able to nurse without very specialized care. I nursed both my older children for over a year and loved the experience. Because he can’t nurse, they would help me use special bottles to feed him, and he might have trouble thriving and gaining weight. They said he might have issues with speech. Well, I’ve been there with J-babe. But they even said he might have other genetic abnormalities because of the cleft, and he would need to be seen by a team of specialists right away to determine his potential for development in all areas. A whole team of specialists. Within hours of his birth, we had learned some astonishing facts: our baby boy had a birth defect. Our baby cannot nurse. Our baby might have speech or development issues. Our baby would need a team of doctors.

Now to a first-time mom, or any mom at all, this would be so much to take in. But if I’m being completely honest, I never felt overwhelmed. Not once. I never felt scared, or worried, never lacked confidence in my ability to care for him, even in those first days in the hospital. I knew, without a doubt, that this very special baby had come to me at exactly the right time in my journey as a mom. This beautiful boy with bright red hair would be just fine. The strength I had gained up to that point from all the previous trials with my older kids was enough to get me through. My Father in Heaven knew I was up for the job, no matter how difficult or new it would be. In fact, his little challenge seemed easy compared to what I had been through. I was comforted immediately after speaking with the nurses, and I knew everything would be okay. I’m his mom…I can do this.

So we forged ahead…we met with a team of doctors just soon after we received the word from the nurses. They showed us the inside of his mouth. He had all his gum line, but from right behind the gums all the way back there was an opening about 1/8 in wide. He had no uvula. But it didn’t matter to me…he was the most beautiful baby, inside and out. You couldn’t see his imperfection on the outside at all. 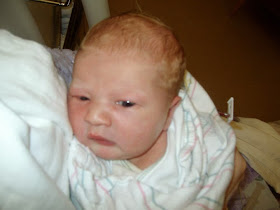 We first tried nursing, just to see if it would even work. After trying every method and position, we all knew it would not work because of how wide his cleft was. So we had to come up with a way of feeding him. He wasn’t ready to take the Mead Johnson bottle, with special nipples for cleft lip/palate babies. So as we sat brainstorming with a neonatologist, lactation specialists, and other nurses, I noticed that someone had placed a pacifier in his mouth, and he was actually keeping it in. He was somehow using enough suction to keep it in his mouth and soothe him. So I asked the team if we could get him to eat while sucking on the pacifier. One of the nurses suggested using a syringe connected to a small tube that was inserted through the hole on the pacifier and then into his mouth. Amazingly, it worked. He started swallowing formula as I slowly pushed it through the syringe. To all of us, it was a miracle. The first night they wanted to keep him in the nursery, but allowed me to come try feeding him with our new method. He continued to eat that night, and all the next day. The second night, they let us keep him in our room, and all night he would wake, and I would ready the syringe and pacifier. He was eating. I can do this.

The next day the doctors told me I had to make sure he kept eating consistently in order for him to come home that afternoon, but then one doctor remarked how well I was handling this new baby, and how well he was eating. He said many mothers faced with this challenge really struggle and end up staying in the hospital much longer until they can figure it out. So they were surprised how well everything was going with Little N. All I could say was that I just figured it out, and even in those first days, I felt a strong bond with him and knew we would be fine.

The last hurdle to get through in the hospital was his hearing test. Something they told us from the beginning was that his hearing could be affected by the cleft. It turned out that his test ended up being done as we were getting ready to go home. Now usually a hearing test is pretty quick, so when an hour went by, I began to get nervous again. What if they’ve found something out? What if they’re calling in more specialists right now? I know I can handle his feedings with the cleft now, but can I handle a hearing loss as well? So I called the nurses, and finally one came back with Little N, and said he passed the hearing test just fine–but he did cry too much during the test, and because of his cleft, she wanted to be extra thorough, so she had to start the test over multiple times. Huge relief for us. No hearing issues. In the first three days of his life, we learned how to feed him, and we learned that he could hear. We didn’t have all the answers, but it was enough to go forward, trusting that things would be okay, for now. Little did I know how many doctor visits awaited me… 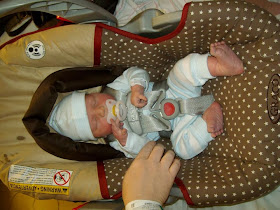